Inside Islam: What a Billion Muslims Really Think, a new 55 minute long documentary film from Unity Productions Foundation, explores the expertly gathered opinions of Muslims around the globe as revealed in the world’s first major opinion poll, conducted by Gallup, the preeminent polling organization. Following its release, the film was broadcast on select PBS stations during 2008 and 2009.

Gallup researchers began by asking the questions on every American’s mind. Why is there so much anti-Americanism in the Muslim world? Who are the extremists and how do Muslims feel about them? What do Muslims like and dislike about the West? What do Muslim women really want?

Crucial policy decisions hang on these questions. They continue to generate passionate disagreements in the public square. Yet for all the heat and controversy, the actual views of the world’s Muslims have been conspicuously missing from this debate.

Now, we have the missing answers and statistics, gathered, parsed, and analyzed not by pundits but by professional researchers.

As part of this groundbreaking six-year project, Gallup conducted tens of thousands of interviews with residents in 35 predominantly Muslim nations, as well as smaller populations in Europe and the USA. The broad extent of the polling has delivered findings for the world’s 1.4 billion Muslims with a plus or minus accuracy of 3%.

Focused on the issues of Gender Justice, Terrorism, and Democracy –the film presents this remarkable data deftly, showing how it challenges the popular notion that Muslims and the West are on a collision course. Like the research, the film highlights a shared relationship that is based on facts – not fear. One might wonder how a documentary interviewing academics and other experts about survey data could possibly be interesting. Even I--a former academic who enjoys this stuff--had trouble imagining how it would work. But [Inside Islam] does.

We must become more understanding in order to make more allies rather than enemies. [Inside Islam] can also help people to become more diverse and accepting of people that are different, if we only opened our minds.

Students got a sense that 'they are Muslims' [from watching Inside Islam]. They realized that which motivates Muslims isn't different from what motivates them.

I showed [Inside Islam] in my Recent Islamic Political Thought course, and the students benefitted from it greatly. I attended a showing of the film here in Houston and have a high opinion of the project.

Inside Islam should encourage everyone to admit that real dialogue is truly possible between the Muslims of the world and the West, between Muslims and Christians, and between whomever else we agree should be dialoguing. 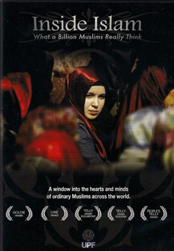