On a Wing and a Prayer: An American Muslim Learns to Fly follows Monem Salam as he enrolls in an open-minded flying school, where he soon draws the attention of the FBI, which confirms his family's fears. Monem is a portfolio manager, the son of a Pakistani commercial pilot. You might have come across Monem in financial media, where he's appeared on CNBC and been profiled in Businessweek.

His wife Iman's family is Palestinian and although initially dubious about the marriage, now accepts the cultural differences. With three young children, Iman's prankish student days are behind her. She's happy to find time to cultivate her inner domestic diva, wisecracking about her entertaining skills and her husband's flight plans. Monem's "green" decision to commute by scooter only heightens his likeability. These modern-day Americans cast off stereotypes and refuse to succumb to victimhood despite being denied privileges afforded most other Americans. This gently funny film follows Monem as he works towards his goal, engaging his wife, family and community in the process. 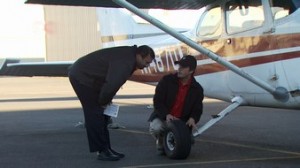 On a Wing And a Prayer Reviews

[On a Wing And a Prayer: An American Muslim Learns to Fly] delves deep into the hearts and minds of a devout Muslim family living in small-town America. They laugh, they hope and they experience heartache, victories and failures in pursuit of their American dream. These modern-day Americans cast off stereotypes and refuse to succumb to victimhood despite being denied privileges afforded most other Americans.

[On a Wing and A Prayer: An American Muslim Learns to Fly] was a great avenue for students to explore their feelings regarding big rock issues like war, fear, faith and even family.

Which is why Monem Salam had to do it.Well, proving a point wasn't the sole reason. Salam has dreamed of being a pilot since he was a boy in Pakistan. He was drawn to Bellingham Airport by the same force as everyone in his beginner's class. He wanted to touch the sky. [On a Wing and a Prayer: An American Muslim Learns to Fly]

My students were both amused and saddened by On A Wing and a Prayer: An American Muslim Learns to Fly.  Amused because the film presented the subject with a touch of humor, and saddened by the difficulty the family has in freely exercising their religion despite the promise of the First Amendment.

On a Wing and a Prayer: An American Muslim Learns to Fly helps remove some of the clichés about the alleged strangeness of Muslims and points to their successful assimilation into American life. 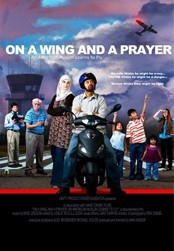