Muhammad: Legacy of a Prophet tells the story of a man who changed the world 1,400 years ago and now lives in the United States through the lives of the millions of Americans who practice Islam and regard him as God's prophet. 2 hours.

It travels in the footsteps of the founder of Islam's Prophet Muhammad to the Arabian Desert and the holy city of Mecca where Muhammad's story unfolded. But the film does not just stay in the past. Much of its story is told through the observations of contemporary American Muslims, including a fireman at the World Trade Center on September 11th, a second generation Arab-American family building a community based on Islamic principles, a Congressional Chief of Staff working for justice, and a refugee fleeing religious persecution, whose experiences in some way echo Muhammad's life.

With some of the world's greatest scholars providing historical context and critical perspective on Islam, Muhammad: Legacy of a Prophet is history in the present tense. It tells of intrigue and faith, bitter persecution and the birth of a holy book, brutal war and brilliant diplomacy in a desert environment where tribal allegiance was often the only protection. 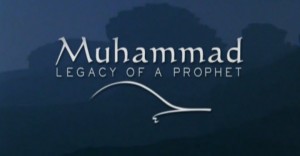 Muhammad: Legacy of a Prophet Reviews

Riveting, informative, inspiring, Muhammad: Legacy of a Prophet should be required viewing for non-Muslims. It sets the record straight about a man who has been demonized by those who know little to nothing about the substance of his life or his message.

[Muhammad: Legacy of a Prophet is] ...a candid, thoughtful, flowing, visually stunning film...

...20,000 Dialogues allows people to find out where they have common ground. Dialogues don’t always have to be about the Palestinian issue. 20,000 Dialogues helps to show that Muslims care about more than just issues in the Middle East. [Muhammad: Legacy of a Prophet]